Ropeless Lobster Fishing Is Good News For Some Whales : NPR

Rob Martin, who has been fishing off his boat for the last 29 years, and his partner haul up a 150-pound end trap while ropeless lobster fishing in Cape Cod Bay in Massachusetts. 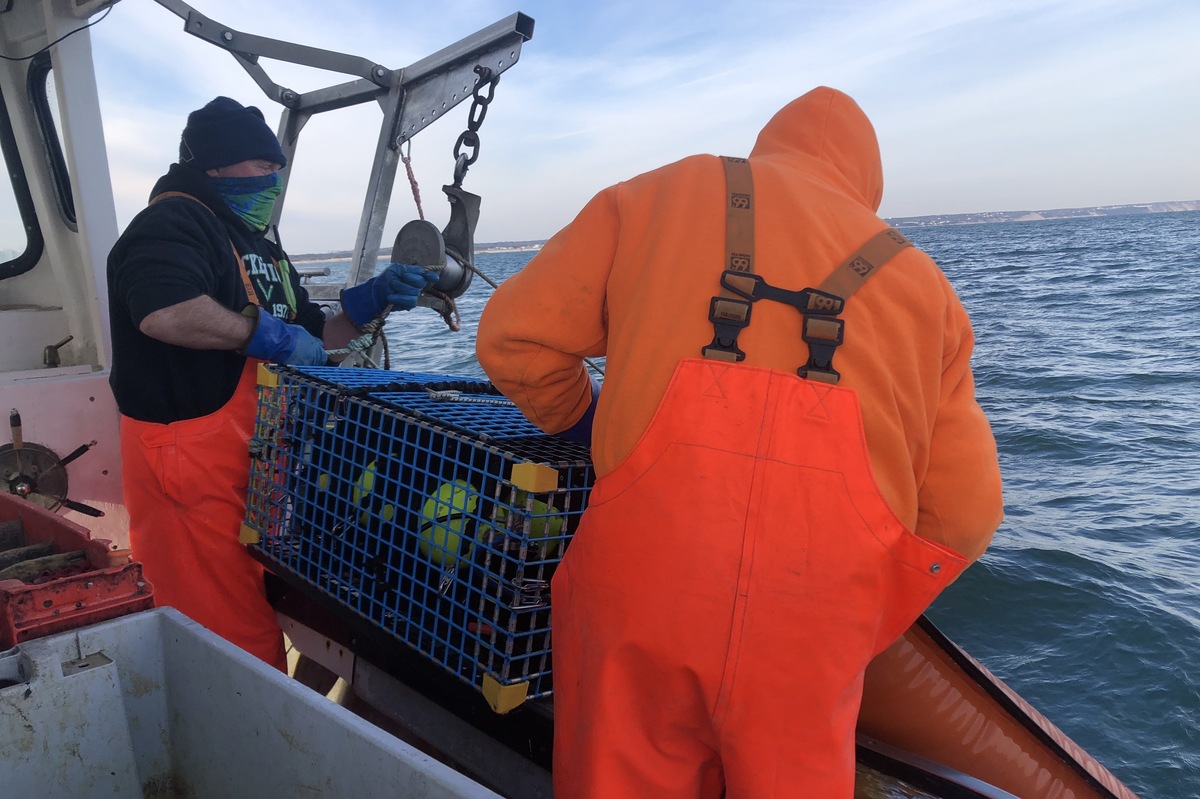 Rob Martin, who has been fishing off his boat for the last 29 years, and his partner haul up a 150-pound end trap while ropeless lobster fishing in Cape Cod Bay in Massachusetts.

After three decades of fishing for lobsters in Cape Cod Bay in Massachusetts, Rob Martin knows his boat inside and out.

“It’s only 40 feet. It was big when I first got it and now it seems small,” he says while warming up inside the cabin on a cold morning.

Just as Cape Cod lobstermen have done for centuries, Martin used to check his traps by looking for buoys connected to cages on the ocean floor by ropes.

But his buoys are gone and he is one of a handful of Massachusetts lobstermen testing ropeless fishing systems.

“Everything’s ready to go,” he calls out as the boat idles about a half-mile outside the Cape Cod Canal, near where he last dropped his traps.

With one hand Martin reaches for a pair of waterproof overalls and with the other he grabs his iPhone to open an app that sends acoustic signals to his traps 50 feet underwater.

In seconds, the app lets out two quick beeps confirming that somewhere down below an air tank inside a trap is inflating a balloon that lifts the trap to the surface. Martin looks out across the water quietly, waiting for something to appear.

“Oh! There it is,” he says as a long bright-orange balloon pops out of the water, resembling one of those blow-up tubes dancing outside of a car dealership. 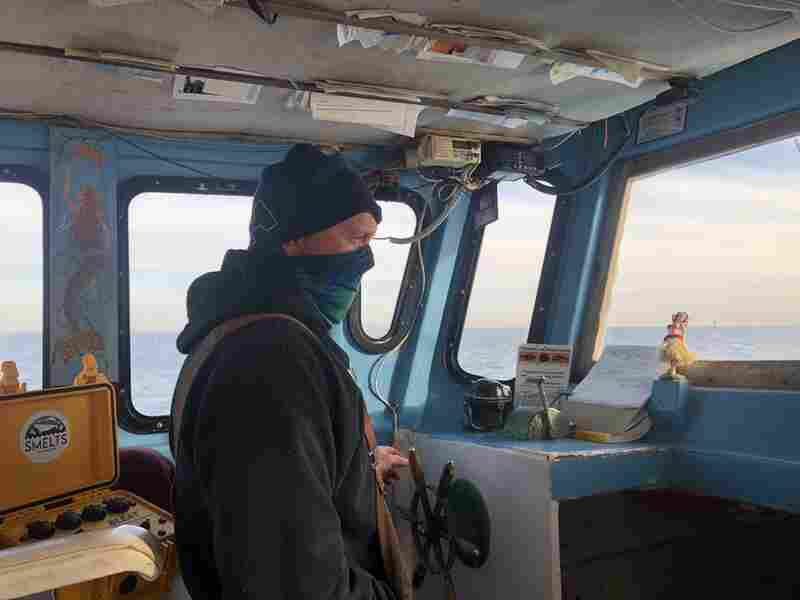 Rob Martin, 56, fishes off his boat, the Resolve, in Cape Cod Bay in Massachusetts. 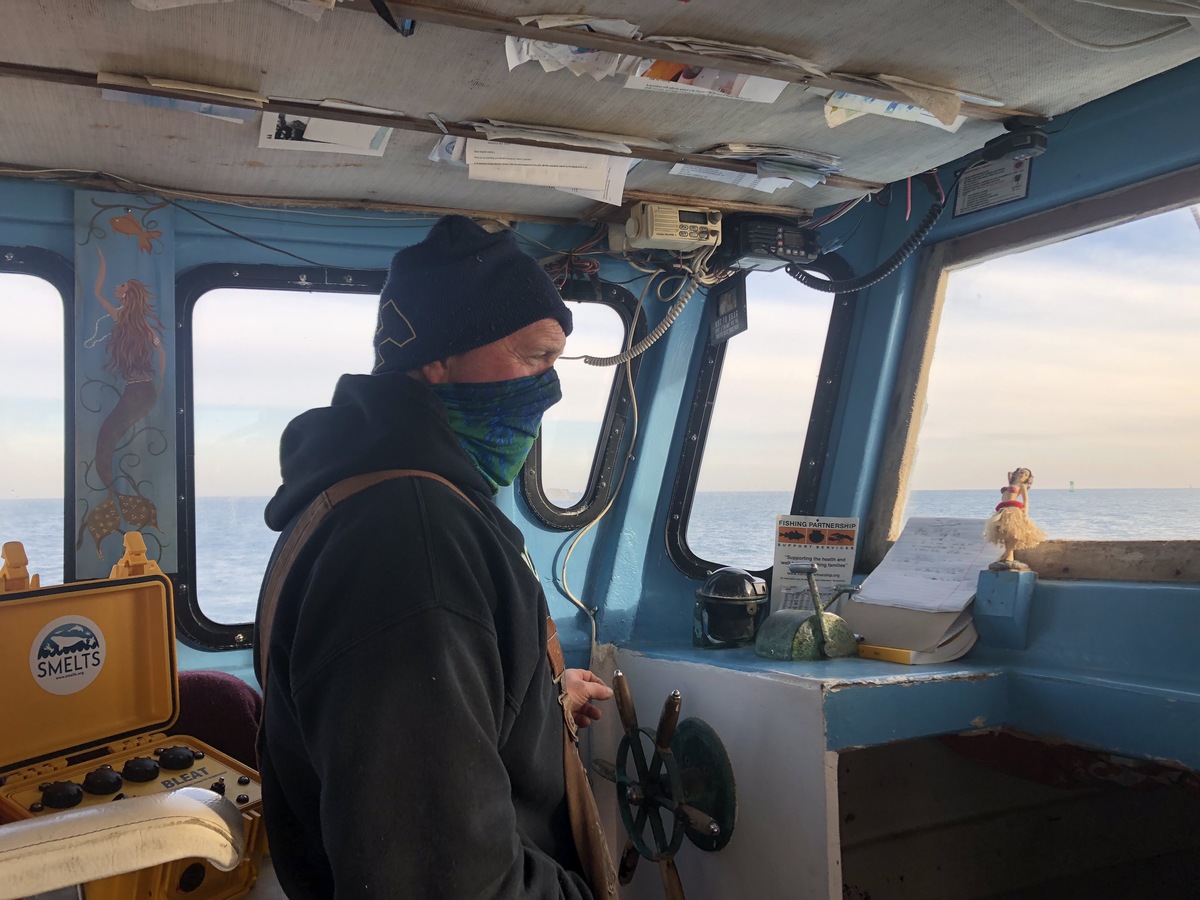 Rob Martin, 56, fishes off his boat, the Resolve, in Cape Cod Bay in Massachusetts.

By using this technology, Martin eliminates the need to use vertical ropes which can be deadly for North Atlantic right whales diving for food. Rope entanglement is a leading cause of death for the mammals that can weigh as much as 70 tons. In fact, more than 85% of right whales have been entangled in fishing gear at least once, the majority multiple times, according to a report from the New England Aquarium.

Today, with an estimated 370 North Atlantic right whales remaining, the species is classified by the IUCN Red List as critically endangered, one step from extinction.

To save the whales from the brink, state authorities have instituted seasonal fishing closures in waters off New England. More protections from the National Atmospheric and Oceanic Administration, which some fishermen consider burdensome, are still pending.

Conservationists hope that fishermen like Rob Martin can prove ropeless fishing can save both the whales and the lobster industry.

Many lobstermen, though, say they prefer the closures to the technological leap they would have to make to adopt ropeless fishing.

“The technology is just like … we’re at the Model T today and people expect us to be at the Tesla tomorrow,” explains Beth Casoni, who is executive director of the Massachusetts Lobstermen’s Association. She also says the cost is prohibitive — switching to ropeless gear could cost a single fisherman up to $70,000.

Another major concern is safety. Without buoys on the surface marking where lobster gear is located underwater, fishing boats that drag nets along the seafloor can get caught on lobstermen’s traps. Ropeless technology manufacturers said they’re still working on developing a shared app so fishermen have a clear picture of trap locations on the ocean floor. Casoni says that’s necessary before her association will seriously consider going ropeless.

“We need a large-scale, scientific, unbiased feasibility study on the whole thing,” Casoni says. “We need to put five boats out in a big square, fishing ropeless, mobile gear, and see what really happens.”

Despite these challenges, Martin says he wants to continue his federally-funded tests.

After all, he has been catching lobsters using the new technology.

“That’s a female with eggs,” he says pointing to the underbelly of one of the lobsters that came up in a trap. “[It] has to be thrown back.”

Martin understands the stakes: If right whales keep dying at current rates, the species could reach a point in the next 20 years from which it can’t recover. And if regulators shut down the entire lobster fishery in order to save the whales, lobstermen could face their own kind of extinction.

EU to Be Tougher in Trade Talks, Include...

Haaland, With a Key Vote in Her Column,...

U.S. Senator Manchin to Back Biden Pick for...

Octopuses Have a Secret Sense to Keep Their...

The Latest: Biden Says Milwaukee Is ‘Cold as...