Members of a rescue crew work to free a whale from a sandbar off the coast of Tasmania, Australia, on Tuesday. About 380 pilot whales have died in the mass stranding, one of the largest ever recorded. 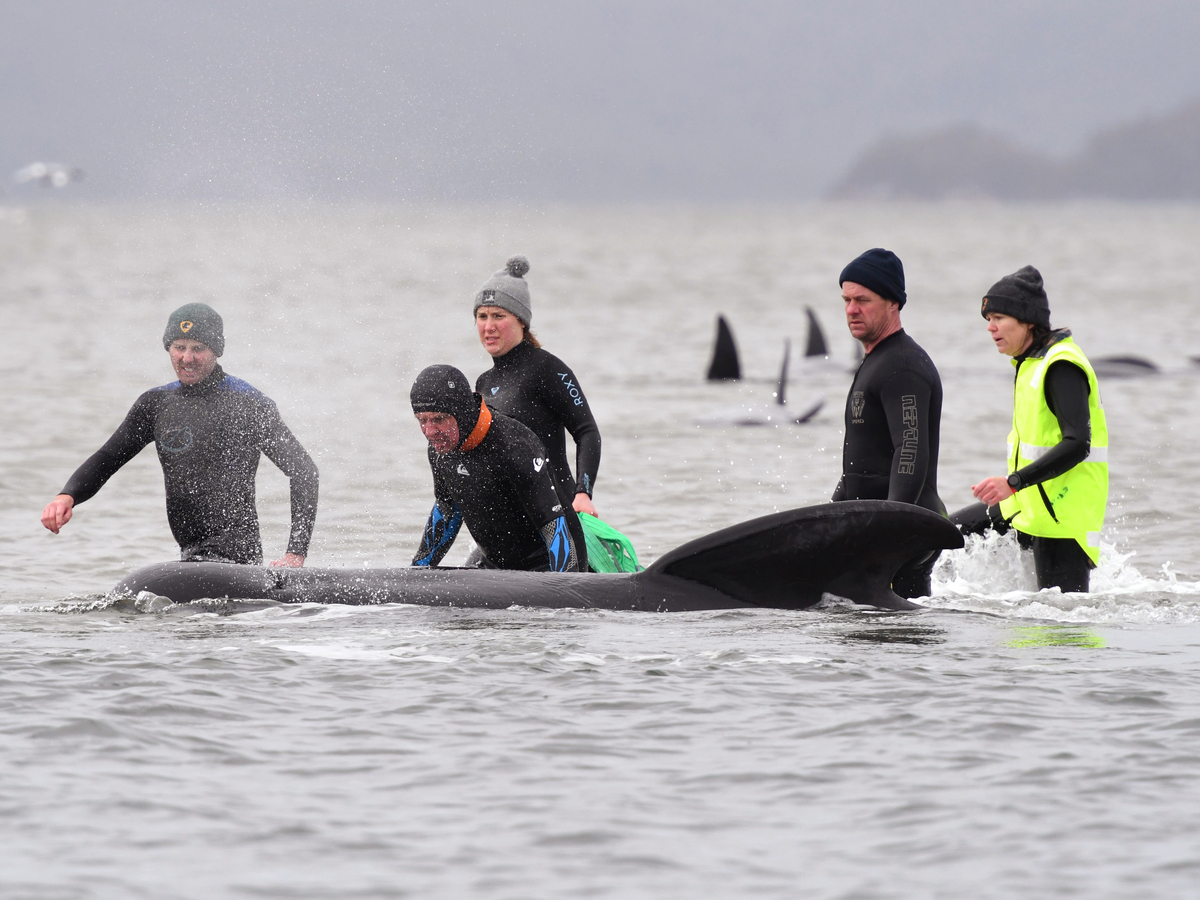 Members of a rescue crew work to free a whale from a sandbar off the coast of Tasmania, Australia, on Tuesday. About 380 pilot whales have died in the mass stranding, one of the largest ever recorded.

At least 380 pilot whales have died off the coast of Tasmania, in what experts are calling Australia’s largest recorded mass stranding event.

Nearly 500 whales have been stranded on a beach and two sandbars along the western coast of the island state.

Initial reports on Monday said that 270 whales had been stranded at three different sites, some of which had already died. Then authorities surveying the area by helicopter on Wednesday discovered another 200 that were stranded about 6 miles to the south – but all of those animals were confirmed dead.

Rescue efforts are focused on the larger group of 270, which is stranded near the town of Strahan, The Guardian reports. About 50 whales in that group have now been freed and have found their way to the open ocean. An estimated 90 in that group were already dead when authorities found them.

“We will continue working to free as many of the live animals as we can,” Tasmania Parks and Wildlife Service manager Nic Deka told news outlets including The Sydney Morning Herald.

“While they are still alive and in water, there is certainly hope for them but as time goes on they become more fatigued and their chance of survival reduces,” he said. “But we will continue working for as long as there are live animals on the site.”

Long-finned pilot whales can be as long as 23 feet and weigh several tons. They have been known to form pods as large as 1,000 members.

Government marine conservationists and volunteers had quickly arrived at the sites to mount a rescue effort on Tuesday, but such “refloating” missions are difficult. Four or five people would work to free each animal, wading into freezing water and attaching slings to the whale so a boat could guide it out.

Ongoing rescue efforts would focus on those whales that are more likely to be alive and those most easily reached, Marine scientist Vanessa Pirotta told the Australian broadcaster ABC News.

“Unfortunately they do have a very strong social system and these animals are very closely bonded. And that’s why we have seen so many in this case unfortunately end up in this situation,” Pirotta said.

And even when a whale is freed, its fate remains in jeopardy.

“They are wanting to return back to the pod, they might hear the acoustics for the vocalizations of the sounds that the others are making, or they’re just disorientated and in this case extremely stressed, and just probably so fatigued that they in some cases don’t know where they are,” she said.

Deka says that while rescue efforts continue, increasingly the question is what to do with the carcasses. He told The Guardian that two methods are under consideration: burying them in a landfill or towing them into open water.

“We do know we can’t leave them in the harbour because they will present a range of issues. We are committed to retrieving and disposing,” he said.

Mass strandings of whales and dolphins are common in Tasmania, as well as in neighboring New Zealand.

Unfortunately, Marine and Conservation Program wildlife biologist Dr. Kris Carlyon said in a statement, “There is little we can do to prevent this occurring in the future.”

The world’s largest recorded mass stranding occurred in the New Zealand territory of the Chatham Islands in 1918, Reuters reports, when 1,000 whales were stuck.

Peter Harrison, a professor at the Southern Cross University Whale Research Group, told the news service that such events are of great concern when so many whales die.

“Quite often we only get to really see them when there are bad outcomes, such as this stranding event,” Harrison said. “We absolutely need some more investment in research to understand these whales in Australian waters.”

Black Microbiologists Push for Visibility Amid a Pandemic

Giuliani makes accusations of fraud that the Trump...